A portable aviation radio is essential equipment for any pilot. It's an easy way to get a clearance before starting the engine, and a valuable way to learn communications without burning any avgas. While these ground-based uses are nice, though, the real value of a radio is found in the cockpit. If the worst should happen and your panel goes dark, a good NAV/COM in your hand can save the day. It can help you navigate to an airport, call ATC for help and maybe even help you shoot an instrument approach.

But how good is a portable radio in an emergency? Do they really work beyond a few miles? We went flying to answer this question, and the results were pleasantly surprising.

There are many ways to test a radio, from comparing specs to putting it on the test bench. Those are fine, and other organizations have run these tests over the years, but it's in the pilot's hand where a radio really earns its keep. So we went flying with four of today's most popular portable aviation radios to see how they work in the real world. 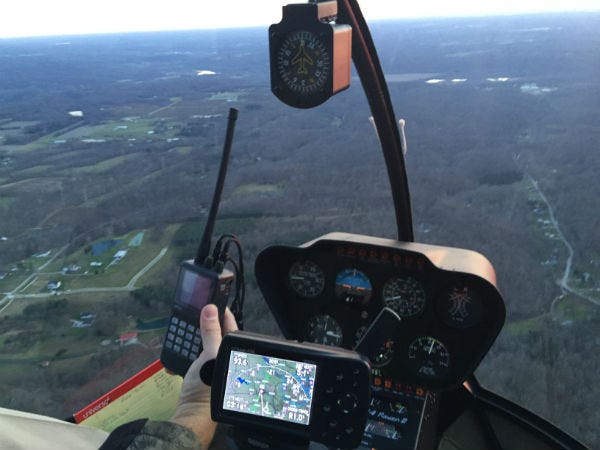 We tested the Icom A14, Icom A24, Yaesu FTA-550 and Sporty's SP-400 over the course of a one hour flight in a Robinson R44 helicopter (hovering made it easier to test transmission strength from the exact same location). For comparison, we made occasional transmissions using the R44's built-in Garmin 430 radio - a far more powerful radio than any portable, but a reasonable baseline. We tested each radio by itself and plugged into an aviation headset using the standard headset adapter cable.

On the other end of the radio was another Sporty's pilot who was using an Icom base station radio with an external (roof-mounted) antenna. We then flew a variety of maneuvers to test each radio at different ranges. The pilot at the base station recorded and evaluated each transmission for clarity, while the pilot on board the R44 did the same for each return call. While this may not have the quantitative value of a bench test, it more accurately answers the question we get most often: "how far out do portables NAV/COMs work?"

The answer to that question surprised us. Most pilots we talk to assume portable radios (whose output is limited by the FCC) only work within a few miles of the airport. That wasn't the case in our flight test: all four radios were perfectly usable at five miles, and even at 10 miles all transmissions were readable. That's plenty of range for most emergency scenarios.

From 10 to 20 miles, results started to vary among the radio models. The Yaesu seemed to be the most limited on range - by 17 miles it was too garbled to understand. The Icom radios worked up to 20 miles, although it gradually became difficult to hear. The Sporty's SP-400 worked flawlessly up to 14 miles, and even at 20 miles it sounded quite good. It was certainly clear enough for a tower controller to understand. Only at about 25 miles did it become unreadable.

As far as clarity, the Icom A14 was the only one that differed noticeably: while it was usable, there was a lot of static. The other three radios sounded fairly clear.

You can listen for yourself. The video below was recorded at the base station as we tested different radios at different ranges.

There have never been better choices for portable aviation radios. For under $400, you can choose from a wide selection of radios with communications, VOR navigation and even ILS in some cases. This type of capability wasn't available at any price a decade ago; current designs are reliable and affordable. 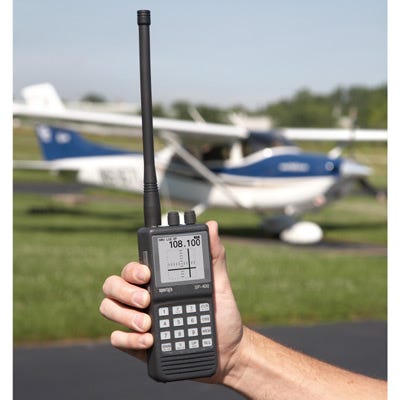 None of the four radios we tested were unacceptable, and we'd feel good carrying any of them for backup. The reality is that five miles is plenty of range in an emergency - all you need to do is let the tower know to clear the runway. Talking to center from 25 miles away is a luxury more than a necessity; you really should be flying. Whichever radio you fly with, a headset adapter cable is a great upgrade. It's not important for ground use, but we'd highly recommend using it in the air. Both sides of the transmission liked it a lot better with a headset plugged in.

For the ultimate transmission range, connecting your portable radio to your aircraft's exterior antenna is the best option. This requires an adapter and a quick install from an avionics shop, but if you own your airplane it's a smart addition.

In the end, the SP-400 had the longest range. Transmissions were understandable beyond 20 miles, and VOR reception was over 60 miles at altitude. You could legitimately navigate using a VOR en route, talk to ATC from 20 miles out and then shoot an ILS. It's certainly not a primary instrument, but for backup use we would not hesitate to use it. It's cheap insurance.

Posted in PIREPs By

posted on 1/29/2019 10:23 AM
I am an amateur radio operator and pilot. For use on the ground, an exterior antenna, good feed line, and height is essential for good reception. Do your homework. The cheapest antenna will typically not work as well. The antenna itself may have gain to pull in more distant stations. If you only need to listen in one direction, get a directional antenna for even better results. Aviation is in the VHF range. If you want to transmit, you need to get an antenna tuned to the aviation band. To listen only, a good VHF Ham antenna should work fine. Ham antennas are more readily available and might be less costly. Consider intervening terrain. You need a light of sight. That is where height comes in -- the higher, the better. It helps with geography and structures. You will more commonly hear airborne traffic before you hear ground-based. The feedline is also important. Signal losses in the connection cable can be substantial. A good quality feed line may cost more than the antenna.

posted on 1/18/2019 12:20 PM
I'm not receiving VOR signals. I was at 3000 ft and within 30 miles of 2 sources. My batteries indicated 1/2. What am I doing wrong? Could the lower batteries reduce my range even though I'm receiving normal communications fine?

posted on 9/21/2018 6:33 PM
Dale and Csongor - the power of the radio has no impact on reception. The aviation band is "line of sight" and you should understand that your reception is dramatically impacted at ground level versus being at altitude. You should consider mounting an external antenna on top of your house or hanger to improve your reception.

posted on 4/7/2018 6:08 PM
I'm also wondering about the same. I got this Yaesu which was tested in this review, but at home I hear nothing. The closest airfields are about 10-15 km away, so no surprise that I only hear static.
I bought it primarily to listen to some ATC / ATIS while at home (closest ATIS source is around 30-35 km) but I guess I was too naive to think such a handheld radio is powerful enough for this.

posted on 2/18/2018 4:40 AM
I'm trying to use my SP-400 from my home to hear CTAF/Unicom at the field 4 miles away. Since I am not hearing anything, I presume I need an external antenna. Any recommendations for a make and model of the antenna and any parts needed to connect? Will any old VHF antenna work?
Set Ascending Direction