In 2005 Google Earth was released as a composite map of the entire world. You had the ability to zoom in almost anywhere and get a bird’s eye view of the surrounding area and landscape. Want to see the streets of Rome? No problem. Trip to a remote part of the country and you want to see the road layout before driving in with printed map directions? Study away. Our grandparents’ desk globe had been digitized—and with remarkable detail—to allow endless hours of research and exploration. The only issue was a roughly 2,000-foot view with no three dimensional depth of buildings or natural structures, but hey, it was 2005. Then in mid-2012 Google announced that it would start the process of auto-generating the 3D mesh required to take the program to the next dimension. This was a great feature update, but still limiting.

The next leap in digital world viewing is upon us with the release of the new Microsoft Flight Simulator program. Regular pilots will now have the ability to view the entire Earth (in beautiful detail at that), from any latitude, longitude, and altitude. We’ll have the ability to dictate the surrounding weather and time of day. In the mood to admire the beautiful rock formations producing Ha Long Bay in Vietnam? It’s only a handful of keystrokes away. Once you’ve taken in those sights, swing on by the Matterhorn in Switzerland and take in the sunset. The world will be our oyster. 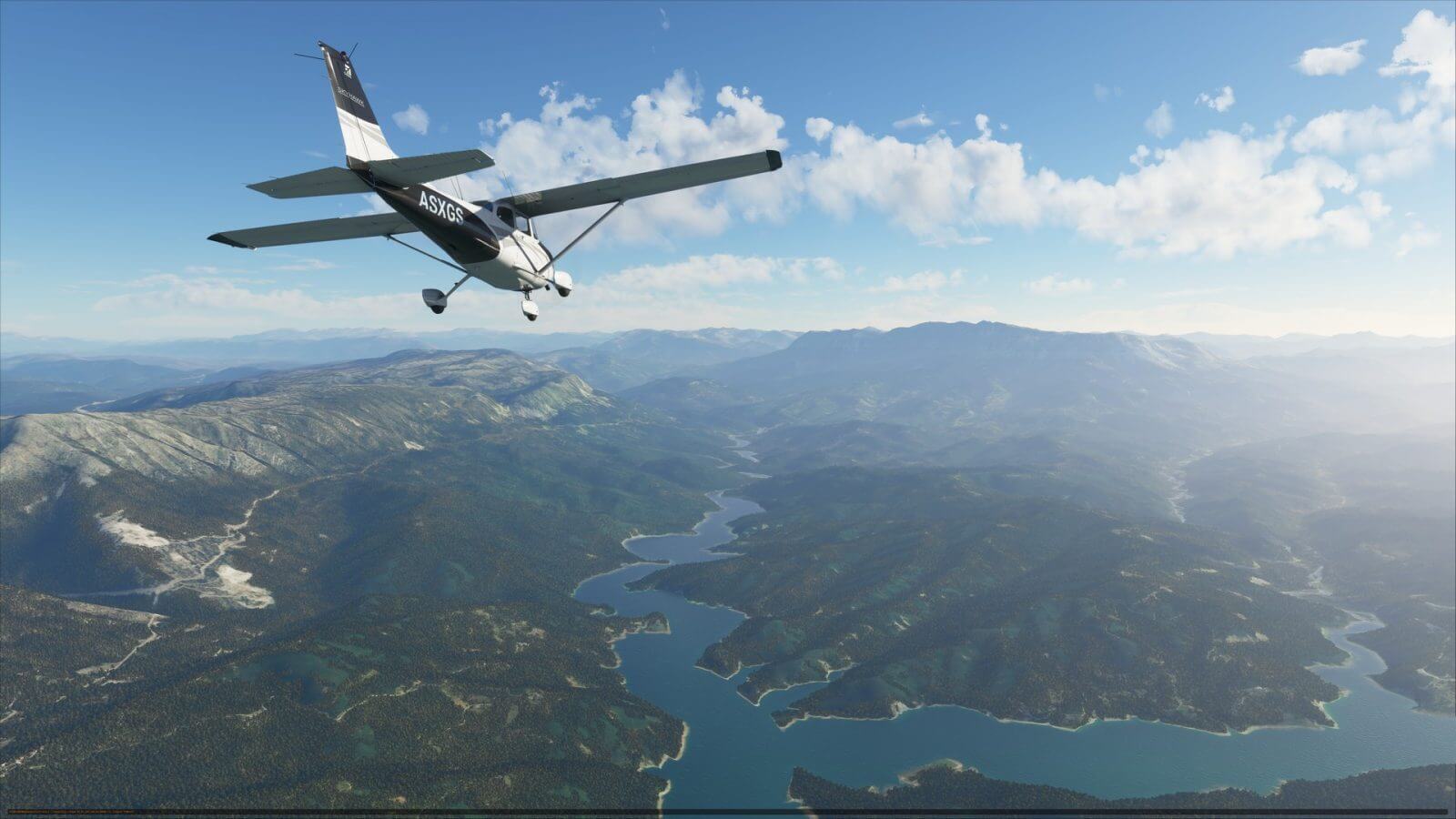 These digital experiences would be great if we were just typing in a latitude, longitude, and elevation; factor in that we can take in these beautiful sights from the front of a continuously moving airplane and we’ll watch as the reflection of the sun twinkles on the water. We can watch cloud formations alter from ever-changing viewpoints. What sets Microsoft’s simulator apart from other systems is the synergy of Microsoft’s very own Bing maps for 3D data and imagery and the flight simulator to create the aircraft's performance in this digital world. Either piece of this simulator by itself would be impressive, but to have both working in tandem is supreme.

Microsoft is offering a beautiful new way to view the world, but that’s not even the best part of their 2020 Flight Simulator program. They’ve spent countless hours critiquing and altering the performance, sound, appearance, and even stall characteristics of the airplanes they’re stocking in the system. Hours were spent scanning the interior of the included aircraft to create an authentic flight deck atmosphere, covering everything from the avionics stack all the way down to seat stitching. Depending on the version purchased, customers will have between 20 to 30 airplanes at their disposal, ranging from the light sport amphibious Icon A5 all the way up to the widebody 787 Dreamliner. 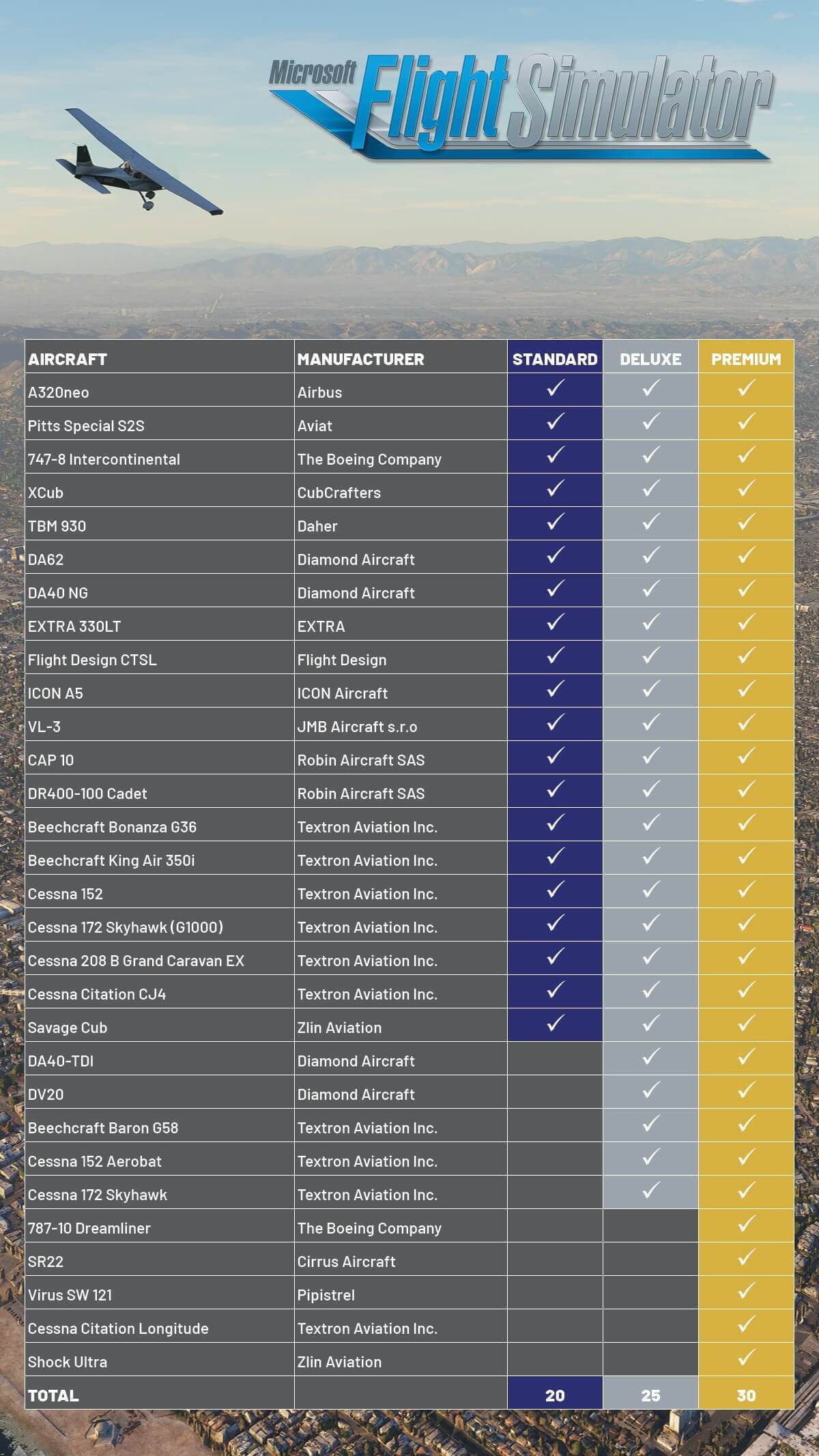 And what’s better yet is they’ve programmed all of these aircraft to perform just like they would in real life. V-speeds, avionics, cockpit configurations, weight and balance characteristics… they’ve left no stone unturned. Microsoft could have called it a day once they successfully mapped and designed the 3D globe. They would have had an interesting product, maybe by the name of “World Explorer” or something similar. But they went the extra mile, and then some, and made sure that our vehicles to explore this beautifully compiled world are just as valuable, if not more, than the ecosystem.

If there’s an aircraft you wished would be on the list but isn’t—just wait. Hundreds of vendors have signed up for the Microsoft Partner program to allow add-ons and complements to the program. It’s just a matter of time before you’ll be able to install the airplane you earned your wings in, or the one parked in your hangar.

This impressive system comes at a cost, and more than the $60 to $120 program price tag (depending on which version is purchased). In order to run this system in all its beauty and elegance, it’s imperative to have a computer that can meet the feature requirements. Think of it as having a high-performance car: you don’t want to throw the lowest grade 87 octane gas in the tank, you want to make sure you get bang for your buck with the premium option. This is the same scenario.

Microsoft Flight Simulator will technically run on a low performance PC, but to reap the benefits of this masterpiece, we have to spend a little bit on a computer. Microsoft has outlined what their recommended computer specifications are. 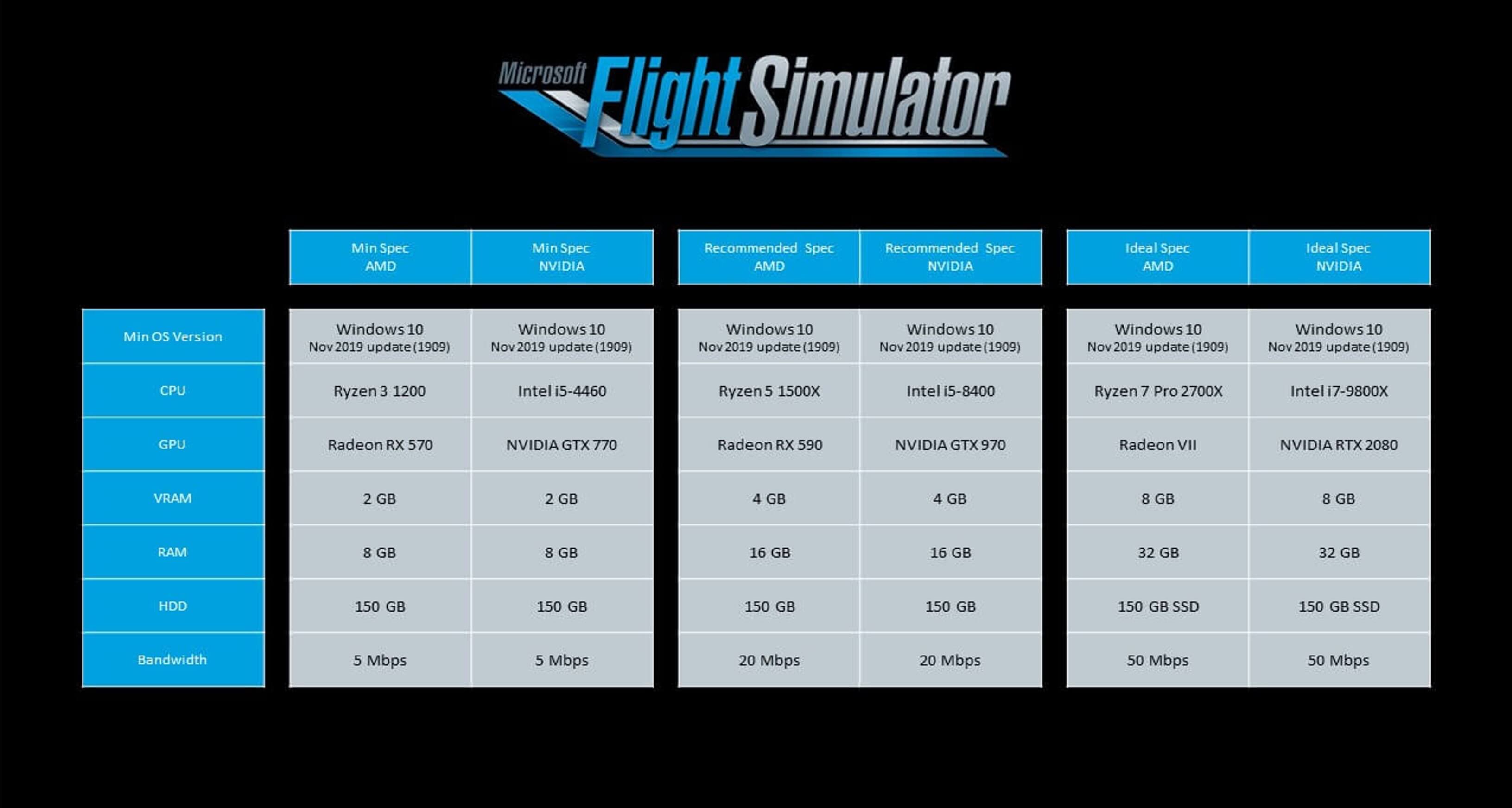 To most this may seem like a foreign language as it once was to me, but I’ll try and demystify what each row is indicating.

In wrapping up, I like to think of these three columns in terms of percentages. The minimum specs would serve as 33%, recommended specs are 67%, and the ideal specs are the full 100%. When I built the simulator we use for testing at Sporty’s, we constructed a system I would rate around 92%. Not the top of the line but also enough power to work well and keep up with updates for a while.

Financially I like to associate it towards ringing out a wet rag. The first half requires little effort, but it gets more and more difficult as you squeeze out those last few percentages. Same with the cost of a computer. It will get exponentially more expensive for each percentage you get closer to the ideal specs. For reference of how much it would cost to design a system like ours with a 92 point rating, ours invoiced for roughly $1600. As is with many things in the aviation industry, buy as much computing power as you can afford.

To say the least, the 2020 Microsoft Flight Simulator program is a beautiful and richly-designed product. For many it will be a game, for some it will be a training tool. In a time when people are chomping at the bit to travel and take in distant views, this program will bring us one step closer to that desired vacation. When pilots pack for their next flight, there’s usually an objective to accomplish, whether it’s taking the family to a new destination, traveling to a new airport to try the local cuisine, or flying to a familiar stomping ground to tell lies in a hangar. Microsoft’s system can even function as a flight planning tool. If flying to an airport or part of the country you're not familiar with, jump in the simulated plane and fly the route or at least the last 30 miles to become familiar with visual cues and checkpoints. We can thank Bing Maps for the accurate portrayal of syncing what we’ll see in the simulator to what we see in the real world.  Microsoft may not be able to accomplish any of those previously mentioned objectives, but they will offer the ability to explore our diverse world in a never before available clarity, and offer a unique training tool along the way.

Stay tuned for more articles on Microsoft Flight Simulator, including hardware options, VFR and IFR scenarios, and more. For now, check out these links to learn more:

Chris McGonegle is a Product Manager with Sporty’s Pilot Shop and a graduate of the University of Cincinnati's aviation academy. He’s a Commercial-rated pilot with an Instrument Rating who prefers to start the day with a $100 cup of coffee before heading into the office. Chris is also Sporty's resident flight simulator expert, and regularly flies both Microsoft Flight Simulator and X-Plane.