The latest version of Microsoft Flight Simulator celebrates one year on the consumer market on August 18, 2021. For a lot of aviation enthusiasts, specifically digital aviation enthusiasts, the celebration started a little early. On July 27, the vivid program from Microsoft made the migration to the Xbox platform and is now compatible with the Xbox Series S and X. Other than a mass-produced personal computer that now supports the program, a lot of gamers/simmers are wondering what else is new with the latest update of the program that’s recently set the flight sim community ablaze. Here's a pilot report.

The first noteworthy mention is that Microsoft Flight Simulator is available to enjoy from a much less expensive total package. With an Xbox model S and the Standard version of Microsoft Flight Simulator, you can take to the digital skies for less than $500. When the average gaming PC package is closer to $2,000, it’s fair to say that a lot of new pilots will enter the digital world via Xbox. 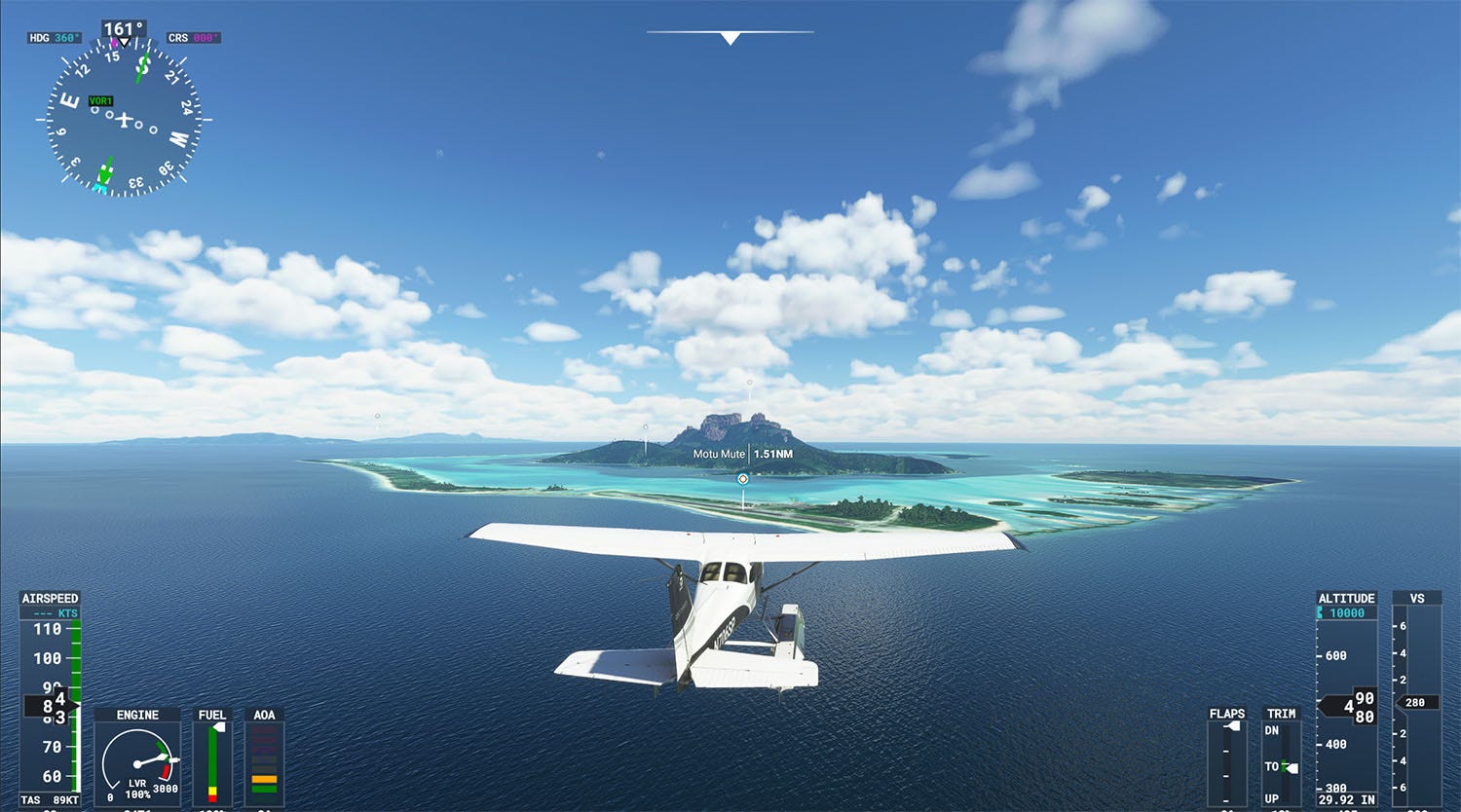 Another feature that’s also available on the PC version (in addition to the Xbox version) is a new category: Discovery Flights. These discovery flights (six in total) provide a detailed exploratory area of the world with location labels and stunning views. Explore Mount Everest with indicators for Hillary Peak, Base Camp, or the top of Mt. Everest itself. Additional Discovery Flights are Bora Bora in French Polynesia, Naples, Italy, Giza in Egypt, New York City, and Rio De Janeiro in Brazil. Many hours can be spent exploring these destinations and familiarizing yourself with points of interest. You’ll be able to double as a tour guide if you ever travel with friends or family to these popular destinations.

Microsoft’s latest update additionally includes an update to the training category of the program, including a competitively focused scoring/grading report for each phase of training and an expansion of the previous handful of lessons. The new guide is broken into four separate sections:

Each lesson includes a step-by-step walkthrough and flight control highlights to show the user which aircraft controls or switches require attention to progress to the next phase of training. If you’re anything like me, you’ll fly those familiar maneuvers a handful of times to make sure you pass each lesson “with flying colors” (pun intended). 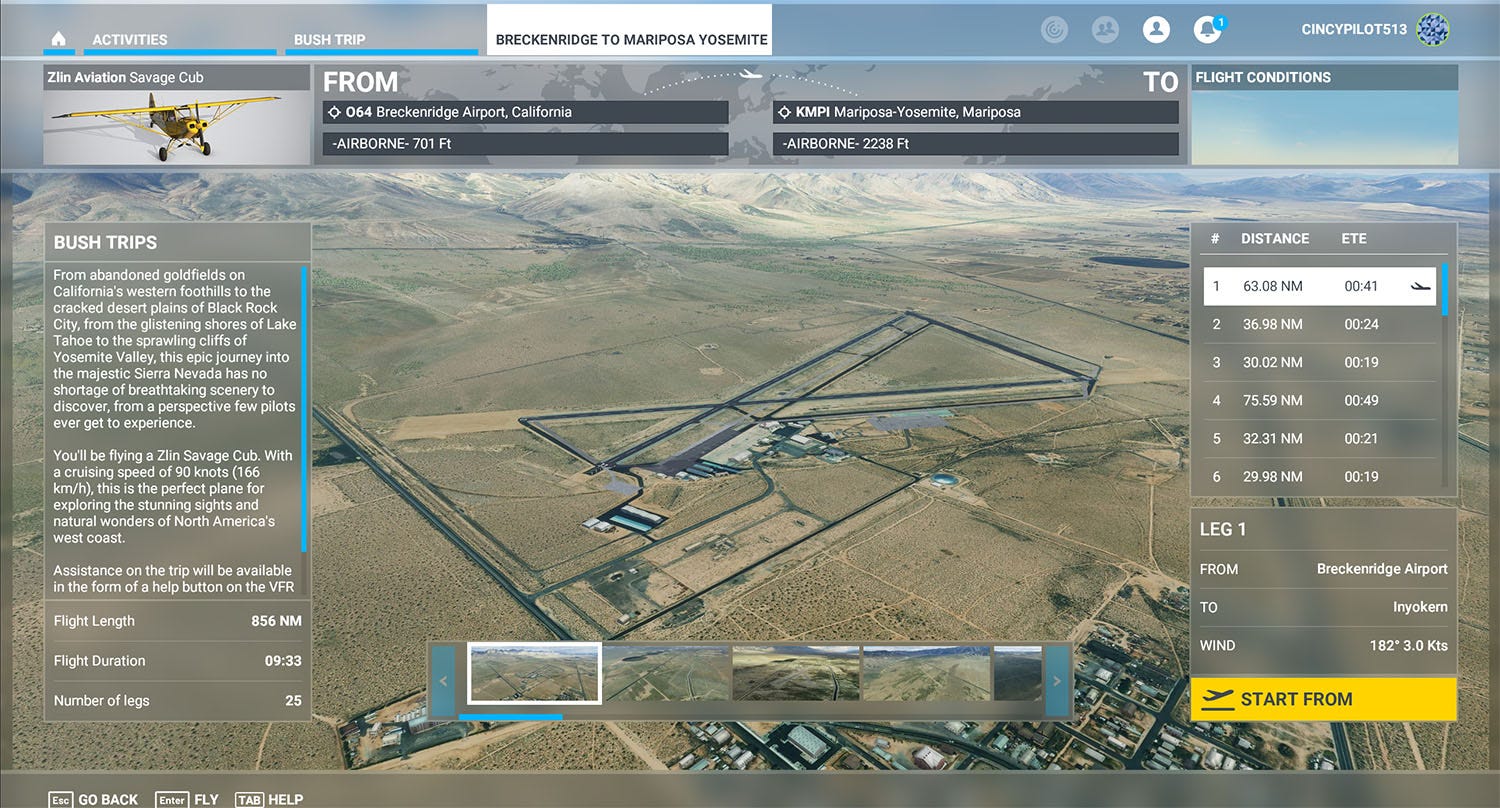 Lastly, there’s a new update to the Bush Trips category of preloaded flights. The discovery flights are meant to explore locations made up of 10 to 20 square miles with no instruction or progression. The Bush Trips offer a preloaded, long distance cross country flight spanning multiple states, sometimes countries, ranging anywhere from a few hours total flight time all the way up to a 25-leg flight from Breckenridge Airport in California to Mariposa-Yosemite airport, spanning 856 nautical miles, in a Zlin Savage Cub. The flight duration at full power (90 knots) will compute out to just over nine and a half hours.

Not everything about the new Xbox platform configuration is roses—control hardware is very limited at this time. With PC peripherals running anywhere from $50 beginner sticks all the way up to $800 yokes used in Basic Aviation Training Devices, there are a lot of options. Regrettably, the Xbox platform only offers one pair of pedals and one stick/yoke option. The reason for this is a security chip that’s required within the hardware in order to enumerate on the console, and because flight sim hardware hasn’t had demand within the Xbox market until recently, our options are few.

The Thrustmaster HOTAS One is a great stick option, offering pitch, roll, yaw, and engine management in addition to multiple configurable buttons. If you’re dead-set on a yoke controller, there are rumors of a detailed package from Turtle Beach known as the Velocity One that will offer yoke and throttle controls for the Xbox flyer, but shipping dates are yet to be determined.

Negating the hardware challenge, it’s clear that Microsoft Flight Simulator making the transition to Xbox will grow the digital pilot population exponentially. The ability to connect the Xbox platform up to a living room television and explore the entirety of the globe with all its vivid features is a sure way to watch free time evaporate. As more and more hardware options enter the market, the community will continue to grow and evolve, and just maybe inspire a handful of digital airplane drivers to visit their local airport, confidently point out the difference between black and red levers, and maybe take those first steps towards a rewarding career or hobby and schedule an introductory flight.

For updates on what’s new in the simulator world, subscribe to our monthly newsletter highlighting sales, product PIREP videos, and additional articles.