One of the many pre-flight tasks pilots perform on aircraft involves fuel, and it’s not just confirming you have enough for your flight and required reserve. Specifically, pilots need to inspect the fuel to make sure it’s the right type and that it is free from contaminants. That is where a fuel tester comes into play. Some pilots call them fuel sumpers or fuel checkers, but most flight schools call them fuel testers. We’ll get to the different models of testers a little later, but let’s talk about what to look for when testing your fuel.

Check the type of fuel 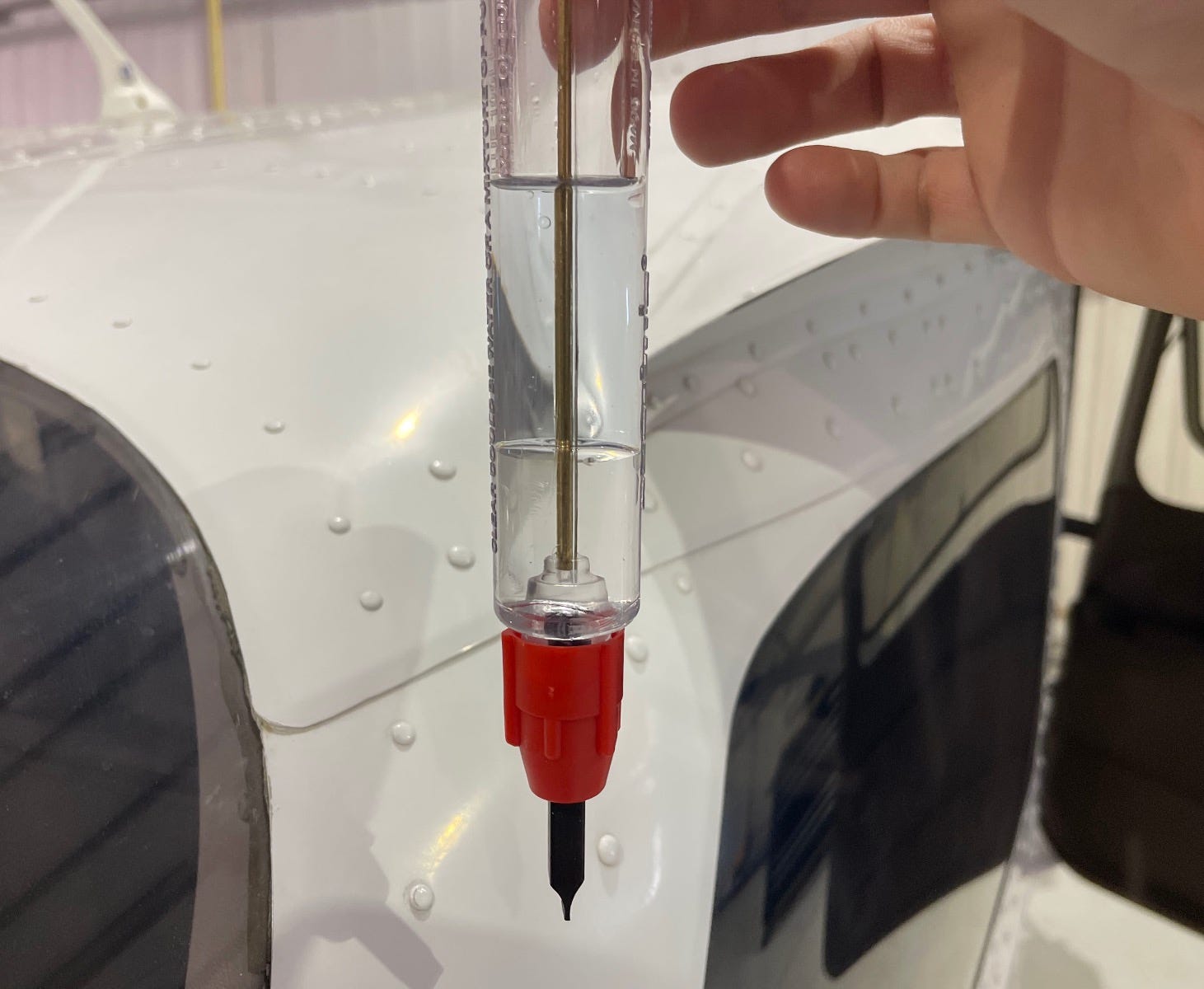 Your aircraft runs on a specific type of fuel. The most common fuel in light aircraft is 100LL (that means 100 octane, and LL is short for Low Lead. Yes—most airplanes still use leaded fuel). How can you tell if your tank is full of 100LL and not Jet A? There are two main things that give it away:

Planes are not like cars. If the engine stops in your car, you coast to the side of the road and call a tow truck. An engine stopping in an airplane is a MUCH larger issue. This is why we make sure our fuel is free from contamination before we punch holes in the sky. There are two main things that can contaminate fuel.

There are two main types of sumps in aviation. Most Cessna training aircraft will have a push-pin style, which are activated by pushing a rod in the center of the fuel drain valve. The second type of fuel drain valve is generally found on Pipers and features two spuds mounted perpendicular to the flow of fuel. Activation of this valve usually involves pushing up on spuds, and these can be locked open if twisted (a messy mistake if you make it!). Some of the Piper-style valves can still be activated by a center push-pin, however you should use the spuds when able. 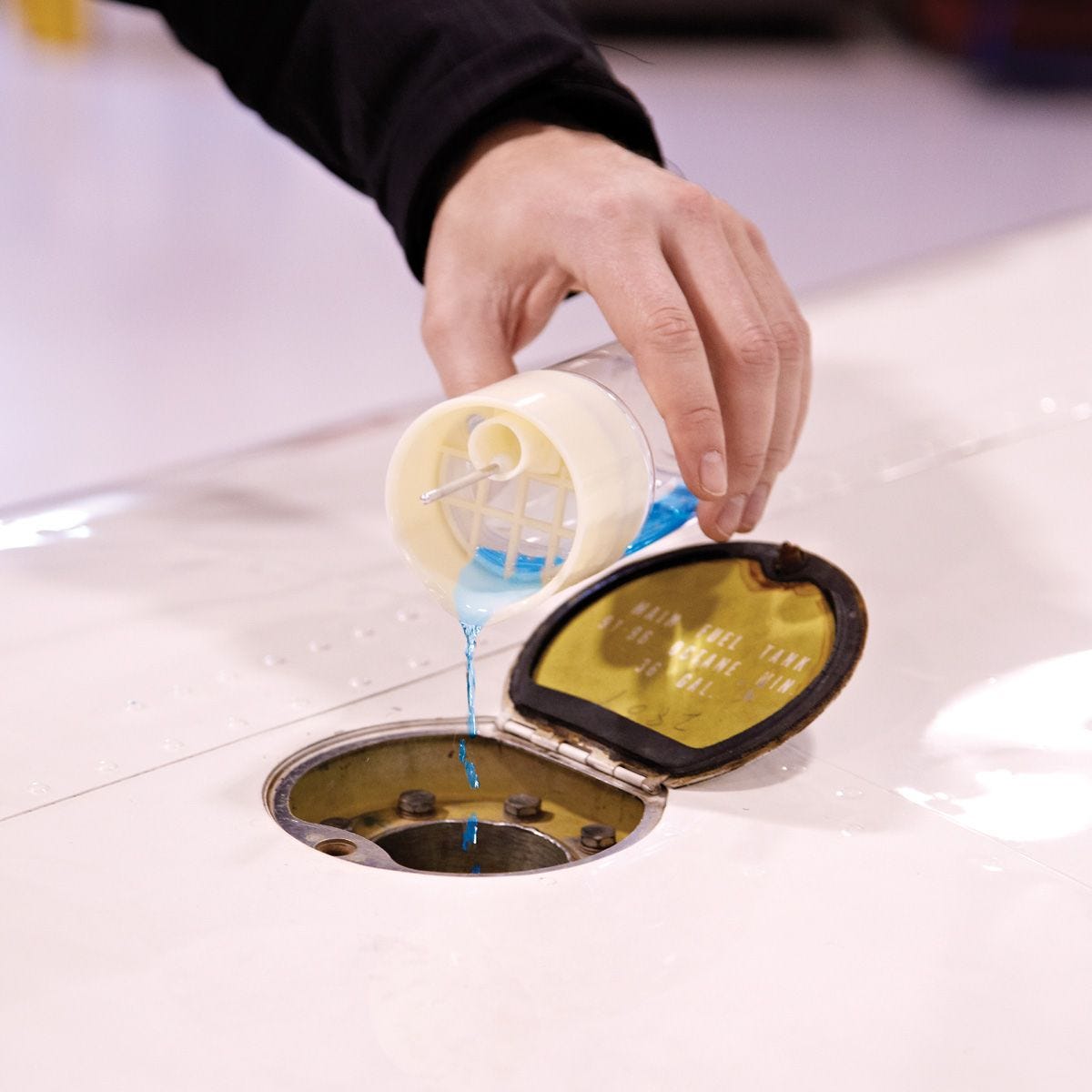 This simple, small, inexpensive fuel tester consists of a clear acrylic cup with a rod in the center. The size makes it easy to stow, but the size makes it less than ideal for aircraft with multiple sumps. Shop Now

This is the fuel sample cup on steroids. The cup is mounted on top of a larger reservoir. Once the fuel in the top cup has been inspected, a simple push on the side of the cup dumps the contents in the larger reservoir. This allows the pilot to hit a bunch of sumps without needing to dump every time. Shop Now

The most popular style of fuel tester is this longer model. It has a screwdriver at one end, which makes it convenient for opening a cowling during pre-flight. The center rod is removable to work with both types of drain valves. Some models have little pieces that are flippable/removable. Shop Now

The GATS Jar has room for a lot of fuel and is often used with larger aircraft. The piece that is used to activate the fuel drain can be reversed so it can fit both types of valves. The GATS Jar incorporates a screen so you can pour sumped fuel back in your tank if so desired, while straining out debris. Shop Now

What to do with sumped fuel?

Once you have sumped and inspected your fuel, what do you do with it? Here at Sporty’s Pilot Shop (like many airports), we have fuel cans stationed around our tie-down area. Sumped fuel can be disposed of in these cans. Some fuel testers have a built in strainer that allows you to dump your fuel back into your tank. The strainer can remove water and contaminants. Old timers might tell you to dump it out on the concrete tie down, or even toss it downwind to let it evaporate. Reminder: this is leaded fuel and many states have rules about this. Dispose of it properly.