The purpose of this three part blog is to grade Microsoft Flight Simulator versus X-Plane on a wide range of features. Each program has its strengths as well as its weaknesses and it’s worth researching those before financially committing to a software trainer. Edition one of this blog will focus on the differences you need to know before buying either program. 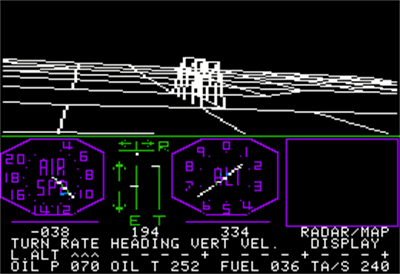 When the first flight simulator program was released in 1979 by subLogic, it required a deep understanding of aviation in order to really enjoy it. There were no online videos to assist in setup and it was four colors relaying graphical terrain, airspeed, altitude, a couple secondary control indicators, and a handful of aircraft instrument indications. It was only 10 years after we first set foot on the moon, but compared to today’s software and computing power, this was an abacus.

Fast forward to today’s flight simulation consumer market and the options aren’t even in the same league as the 1979 offering. Today’s programs use Bing maps to relay an accurate portrayal of planet Earth, regardless of where and when you’re flying. Factor in customizable weather, live traffic, and electronic flight bag integration and you have simulator scenarios that couldn’t have been dreamt of 40 years ago. But which program to use? Let’s compare X-Plane 11 and Microsoft Flight Simulator 2020.

The very first item worth considering when starting down the flight simulation journey is what type of computer will be used to run the simulator. If you have a run of the mill desktop PC that’s 3-5 years old, you’re most likely better suited to run X-Plane 11 rather than Microsoft Flight Simulator 2020. That’s because X-Plane 11 requires less computing power than Microsoft’s program due to less of a focus on outside the airplane features. Plus, it’s a more seasoned and therefore streamlined program.

In the below image you can see the recommended specifications for each program. To avoid going down the rabbit hole of explaining what each specification means, it’s safe to say that the larger the number in the column, the more computing power or financial commitment the program requires. Microsoft's program requires a PC—or specifically a gaming PC—designed or manufactured within the previous two years. Other than that, you’re most likely looking at X-Plane 11.

Another plus for X-Plane is that it will run on a Mac, whereas Microsoft decided they will only allow the program to run on Windows 10 or 11. Lastly, it’s worth mentioning that with X-Plane 11 you can fly before you buy—literally. The X-Plane program allows you to try a free demo to better acquaint yourself with the layout, design, and user interface of the program before committing monetarily.

Next we can focus on the support that both software programs offer to the community. Regrettably, this is an area that a lot of users feel could be improved because it’s next to impossible to speak to a live person if you run into an installation issue or a question regarding simulator settings. The Microsoft team offers a very detailed and organized FAQ forum that more often than not will have the answer you’re looking for. I can say that if you pass through enough hoops and still haven’t found your answer you will have the ability to set a Microsoft Teams appointment with a representative who can help you with elementary issues, but that’s the extent of help available on the web.

With X-Plane we have a similar support page provided by the X-Plane team that can help with simpler questions, but we also have a community created site that covers multitudes of questions, and then some. I attribute the design of this page to the fact that X-Plane customers are very loyal to the continuously evolving program, and the fact that X-Plane 11 is almost five years old. It’s had ample time to address early stage bug fixes, given the simulation community a stable baseline of what to expect, and really created a reliable program—leading to a forums page with conversations that don’t become outdated after an update or two. The last feature of X-Plane.org that’s worth highlighting is the expansive digital store. With over 1,400 aircraft and 12,000 sceneries, X-Plane is my leading answer when a customers asks where they can find their own aircraft in digital form or a detailed home airport.

The final aspect we’ll grade these programs on is how well each program plays with other hardware or software components. Unless you’re a seasoned simmer with a couple dozen digital hours in your logbook, it can get overwhelming having to configure flight simulator hardware for what you would like to happen in the simulator. For that reason, both programs preemptively made sure that 95% of available hardware on the market would be plug-and-play compatible. The glaring difference between the two is the amount of detail and button configuration occurring as soon as you plug the hardware in.

For hardware options that are clear cut in what the majority of the controls need to do (yoke commanding pitch and roll, rudder pedals conveying rudder movement) X-Plane does a great job of taking care of the basics. But on the highly complex items, such as the Honeycomb Bravo, there are no preset control inputs. I see this as both a blessing and a curse: it’s a curse because we will have to manually go in and designate lever one to throttle one, lever two to throttle two, lever three to propeller control one, etc. It will be a little time consuming, but at the same time we will know what each knob, lever, or button does. The Honeycomb Bravo has 51 control inputs it can relay to the simulator program, so knowing or customizing what each one does is the well-earned blessing. Pro Tip: Make sure you designate one to the parking brake toggle. 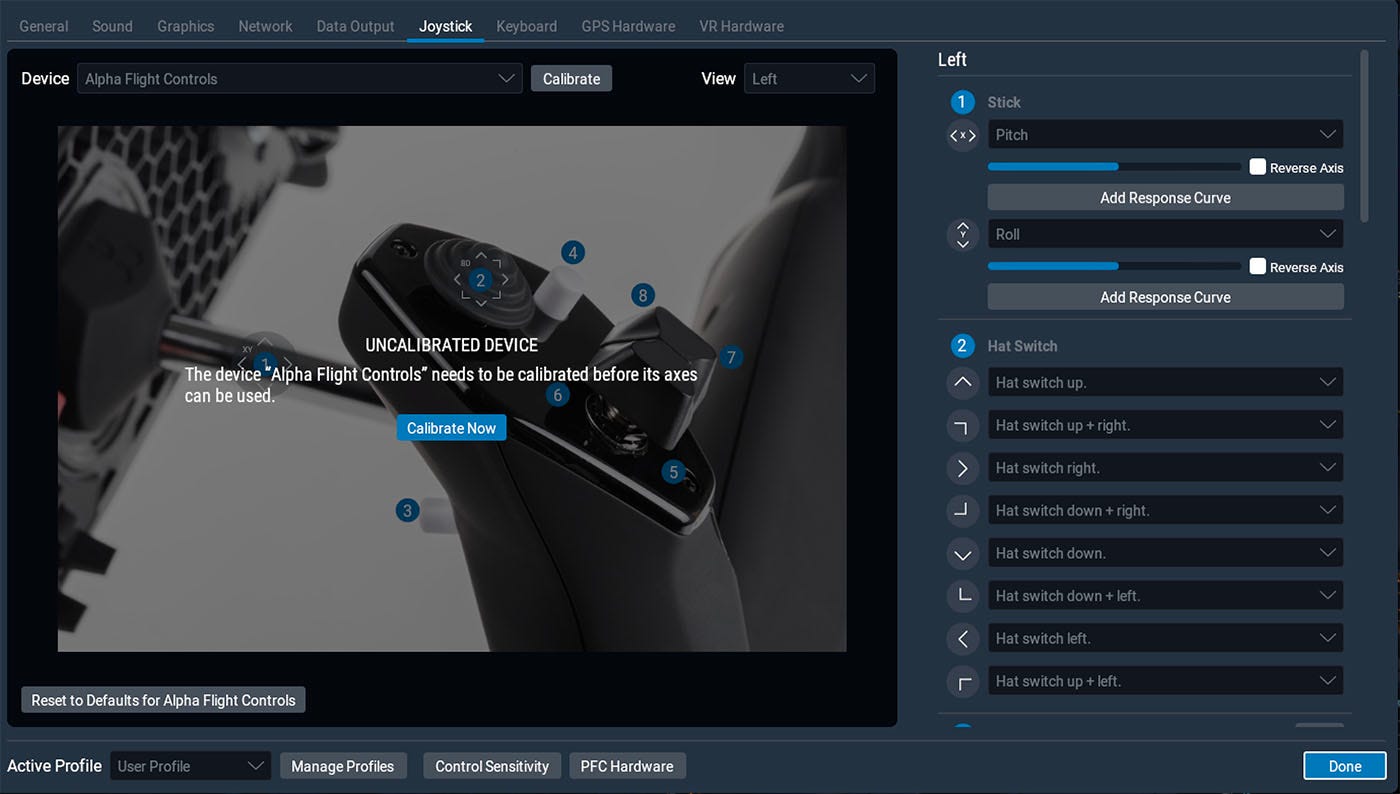 Microsoft Flight Simulator took the alternate approach and made sure that the time between plugging new hardware into the program and getting digitally airborne is a minimum. As evident with the screen grab below, when the Bravo Throttle Quadrant is set to the default profile, you’ll have Radio, Instruments and Systems, Flight Control Surfaces, Lights, Autopilot, Power Management (featuring two throttles, two propeller controls, and two mixture controls), and Landing Gear already configured. This makes it extremely helpful if you’re wanting to get airborne as fast as possible—just don’t expect to know what all the buttons will do the first time you fire up the program. 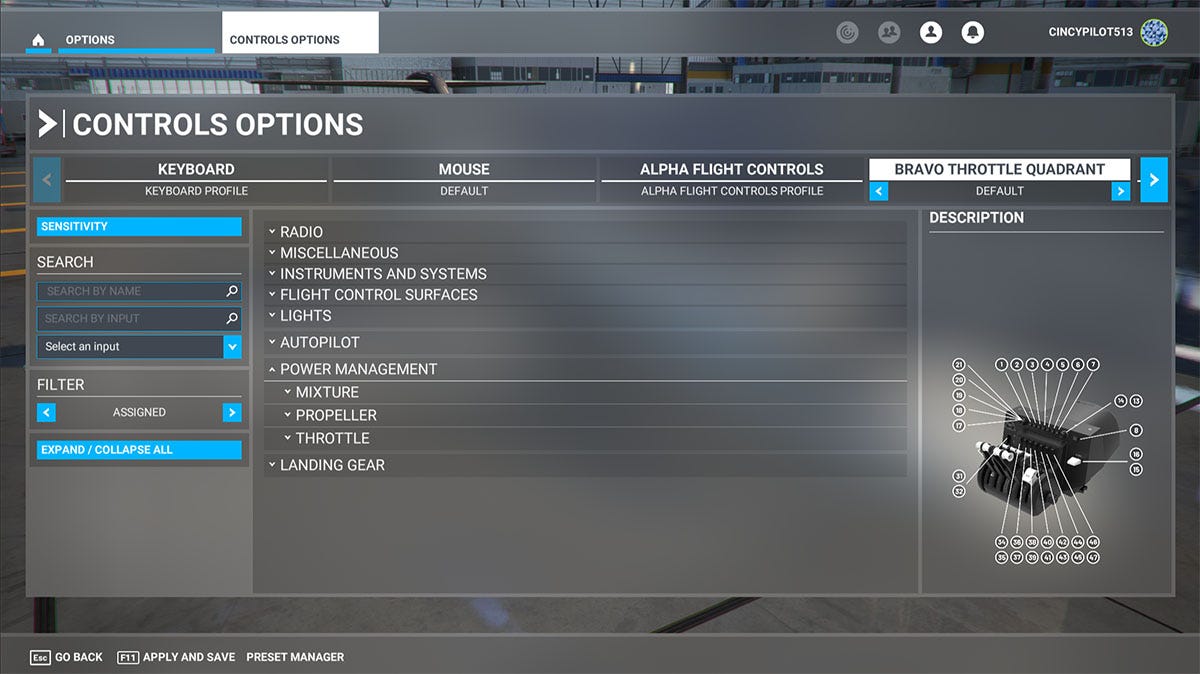 One additional aspect worth mentioning before moving away from button control management is duplicate commands. When a simulator piece like the Honeycomb Bravo is plugged into a computer, some of the switches could be set in a certain position that precludes the activation of that command from other hardware pieces. Here’s a scenario: one of the seven toggle switches on the Bravo is set to “Engage parking brake” without our knowledge, or we forgot we made that command designation. Fast forward to a flight where we’ve designated a button on our yoke as the “Toggle parking brake” command, and as we push that command, we notice nothing is happening. This situation is a sort of zombie command loop that confuses more customers and simulation enthusiasts than you would think. Even though we’ve given a command to toggle our parking brake, we have a set switch in the active position that is continuously giving the command “Engage parking brake.” The best way to avoid this issue (which exponentially increases as you add more and more hardware pieces to your flight simulator setup) is to start with a fresh canvas and configure your hardware to your style of flying.

Both of these simulators are great options for anyone looking to take to the digital skies and enjoy the fruits of today’s powerful computers. When analyzing the pre-purchase strengths of these two programs, it’s worth designating what you want to gain from your at-home simulator. If higher end computer performance is attainable and you want to spend more time looking outside the airplane than inside, Microsoft Flight Simulator gains a point. If you may be subject to a stricter budget or you want to get granular with your plane’s control responses or fly a specific aircraft, X-Plane is your front runner.

The purpose of this three part blog is to grade Microsoft Flight Simulator program versus X-Plane on a wide range of features. The next edition will cover your first five minutes in both programs, weight and balance, failures, live features, and designing a flight plan.