If deciding to buy a radio is easy, deciding which one to buy can be a lot more complicated. There are plenty of good options, but it's mostly a matter of matching the equipment to your mission. Here's our advice.

The most important question to ask 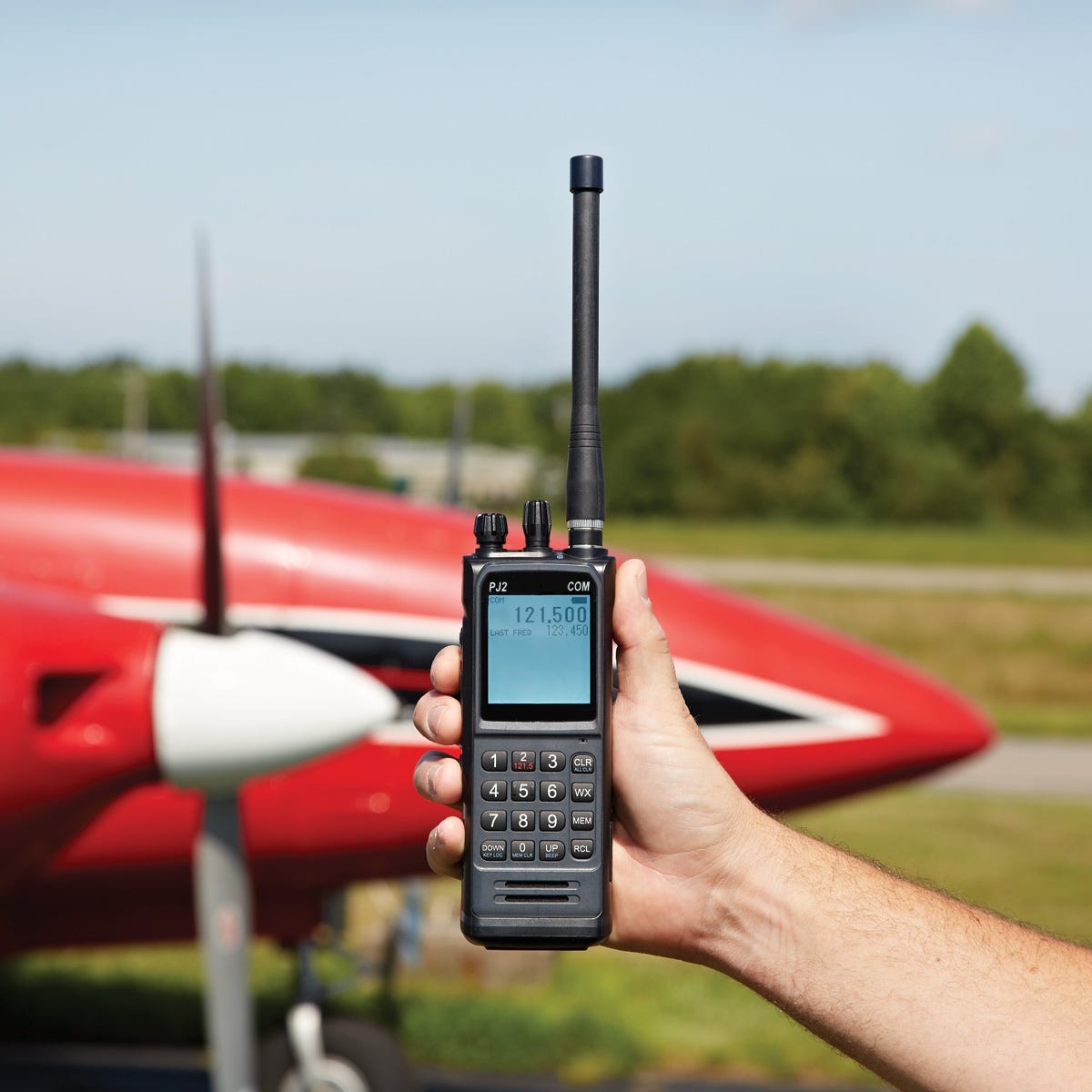 What will you use the radio for? The answer to that question determines which radio is the best fit. If it’s mostly for backup (listen to ATIS, call ATC if the panel quits, etc.) then a simpler radio is the best idea - complicated menus and sophisticated scanner features will just get in the way. We also believe that AA batteries make the most sense for occasional use, since you can throw a radio with AAs in your flight bag and forget about it; no need to worry about recharging another battery pack. If your new radio will be for everyday use (primary radio in an ultralight, line technician's use, etc.), then a rechargeable battery and more features might make sense.

Whatever radio you buy must be easy to use, and that's up to you to evaluate. Most pilots just want the basics, so simplicity and a readable screen matter much more than long feature lists. As we always say: “You don’t have time to read the manual in an emergency.”

What is the range of portable radios?

This is a common question, and it certainly does matter if you're using a radio in an emergency. Unfortunately, the answer is unsatisfying: it depends. All portable aviation radios are VHF, so range is based on line of sight. If you're on the ground or in mountainous terrain, you'll have much shorter range; at altitude in an airplane you'll have significantly better range. In our testing, you can typically receive transmissions 30 miles away with a handheld radio (over 50 miles in some scenarios). You can reliably transmit about 10 miles away (as much as 25 miles in some of our tests) - which isn’t nearly as long as panel-mount radios but it’s more than enough in an emergency. You want to tell the tower 5 miles out that you’re coming, not have a long conversation with Center about a new route. All of the popular radios from Sporty's, Icom, and Yaesu work well for that situation. 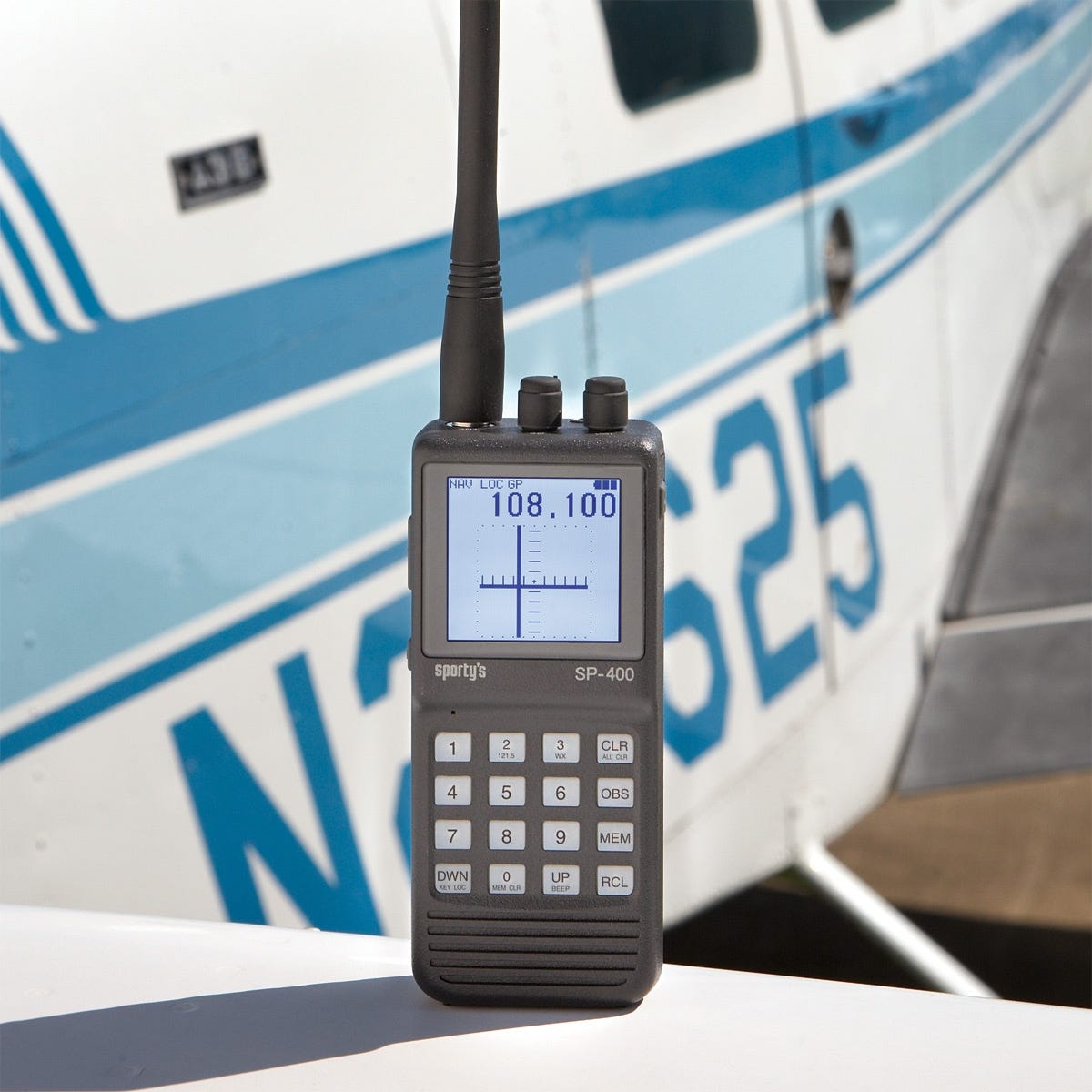 There is some variation in transmit range between models, but it's not dramatic (here are some results from a test a few years ago). The SP-400 and PJ2 had the best overall range in our latest testing - transmissions were clear from 15 miles away (at 3000 feet AGL), and still quite readable at 20 miles.

A plug can be installed in the airplane so you can use the airplane's roof-mounted antenna. This will almost double the distance you can transmit, so it's the best way to improve range if you own your own airplane. This does require installation from an avionics shop, but it's a relatively quick job.

We asked our team of pilots here at Sporty's for their opinions about popular radio models. While each person had their own particular likes and dislikes, some common themes emerged. We've summarized the key points below.

Sporty’s SP-400: The pick for easiest to use NAV/COM, with a large screen, large keypad and no confusing menus. Includes full VOR and ILS navigation, plus NOAA weather radio stations. Included battery pack holds 8 AAs, giving it the edge in battery life over most 6 AA models. 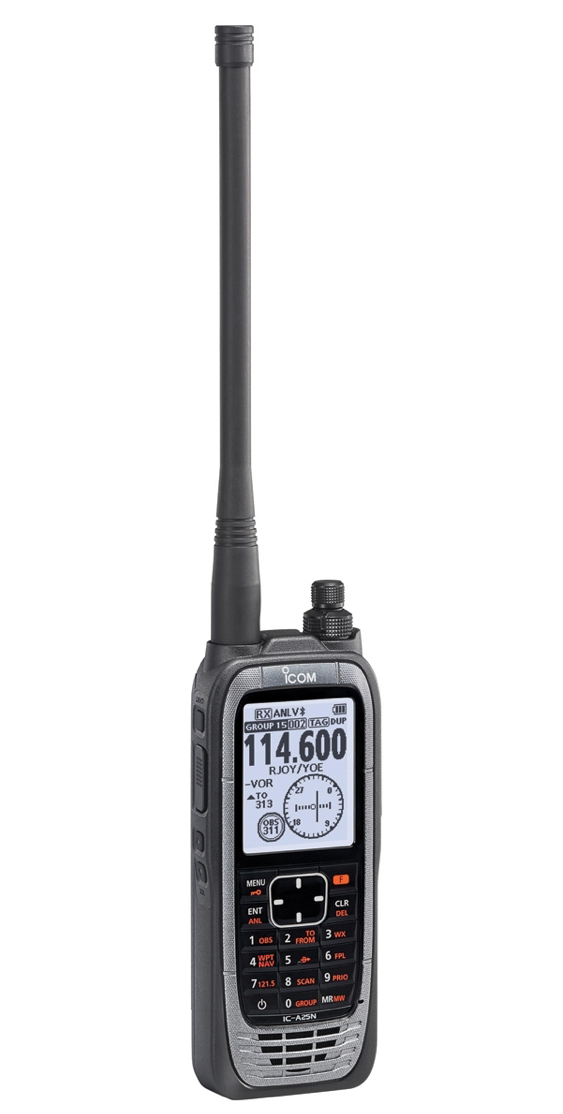 Icom A25N: A top-of-the-line radio from Icom, with NAV, COM, GPS, and even Bluetooth so it can connect to your phone (using the free Icom app). The most feature-laden radio we offer with a great screen, although it’s on the expensive side and those extra features make it somewhat complicated to use. Also note that the GPS doesn’t have a full database, so it’s not like using a Garmin.

Icom A25C: A COM-only version of the A25N - no NAV radio and no Bluetooth. Still fairly expensive compared to the radios below, but a Sport model is also available without all the accessories (and with a AA battery pack instead of rechargeable) for a lot less.

Icom A16: This COM-only model has a smaller screen but is a solid option for someone who just wants a basic radio. Well-made and easy to use, it's available in Bluetooth and non-Bluetooth models so you can pair it to a headset.

Yaesu FTA-250L: This is the least expensive, smallest Yaesu model. It's a good value for a basic radio, but the screen is small compared to other Yaesu models. Includes a rechargeable battery pack.

Yaesu FTA-450L: A COM-only version of the popular 550/750 series, with a much larger screen than the 250L. This is a rugged radio but most pilots said it was harder to use than Icom or Sporty’s models, and it has a small keypad. On the good side, it includes both AA and rechargeable battery packs, plus all the accessories - so there's nothing extra to buy.

Yaesu FTA-550L: The NAV/COM version in this series, with the same screen and keypad as the 450L. A good option if you're looking for an affordable NAV/COM with a rechargeable battery.

Yaesu FTA-550AA: This is the exact same radio as the 550L but with a AA battery pack instead of lithium ion. It's available at an excellent price, so it has a lot of fans for use as a backup, but the learning curve is steeper than Icom or Sporty's models.

Yaesu FTA-750L: The top-of-the-line model from Yaesu with NAV, COM, ILS, and GPS. It has all the features you could want (minus Bluetooth), but note that the GPS is mostly for lat/lon - there is no database, no nearest airport, and no moving map. Helpful in an emergency, but not for navigation.