Editor's note: We are pleased to welcome a guest writer for this week's flight simulator article. Evan Reiter is an airline pilot, flight simulation enthusiast, and co-founder of Flight Simulation Association (FSA), a free-to-join organization that aims to make it easy to get started in home flight simulation. FSA’s annual conference and tradeshow, FlightSimExpo, took place earlier this year in a hybrid in-person and online format. Evan credits time with home flight simulation platforms like Prepar3D for helping him reach the airlines, and formaking him a safer pilot every day.

Home flight simulation is widely considered an essential training aid for pilots. Whether for proficiency, familiarization with advanced avionics, or even to add time to the logbook, the ability to “fly before you fly” has revolutionized flight training. From practicing instrument procedures before your next flight to interacting with real, human air traffic control in a multiplayer environment, home flight simulation is becoming more powerful and accessible all the time.

If you have spent any time looking at home flight simulation technology—or if you know anyone who follows video gaming—you have likely heard about Microsoft Flight Simulator. The title was released in late 2020 and has garnered a large following for its spectacular visuals, community engagement, and regular updates. According to industry data, Microsoft Flight Simulator has the largest following within the home flight simulation community. However, it is certainly not the only option real-world pilots, aspiring pilots, or serious aviation fans should consider.

Alongside Microsoft Flight Simulator, there are two other popular desktop flight simulation platforms that anyone who is thinking of purchasing a flight simulator should consider: Prepar3D by Lockheed Martin, and X-Plane from Laminar Research.

Each of the platforms is under active development and supported by large user bases. Based on FSA’s internal research, surveys, and statistics from large ‘online aviation’ communities, the three platforms could be characterized as follows:

All three platforms offer their own benefits and drawbacks. For this reason, a third of home flight simulation pilots will actively use more than one platform based on the mission they wish to accomplish.

While Microsoft Flight Simulator enjoys the notoriety of being the most popular title and X-Plane has been called the most realistic simulation platform, Prepar3D is being used by home simmers for some of the most precise, in-depth simulation that’s happening—alongside its government, military, and commercial flight training applications.

In this article, we’ll look at Prepar3D’s history, its role in the home flight simulation market, and the effect it is having on military, government, and civilian flight training. 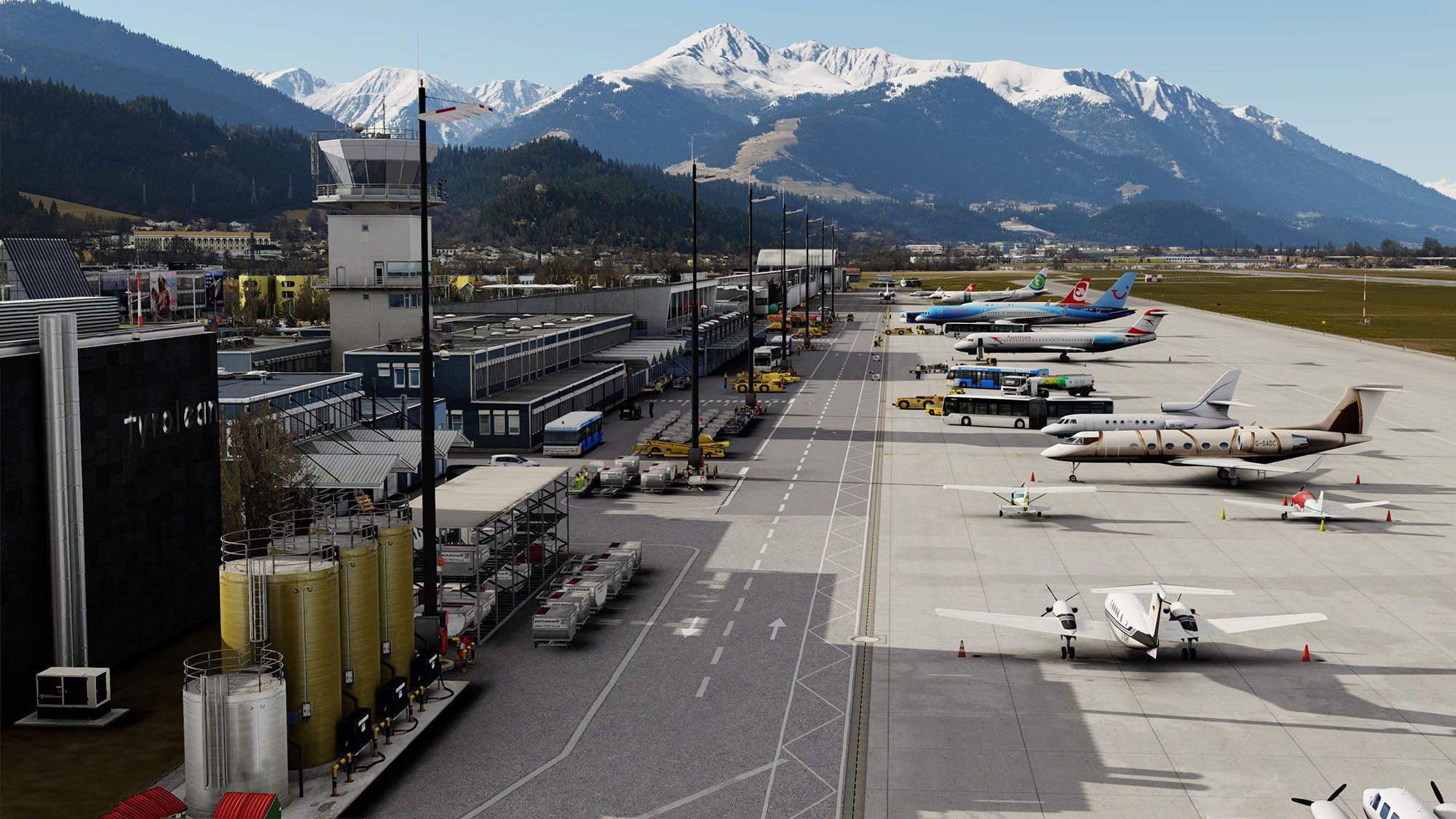 The release of Prepar3D Version 5 on April 10, 2020 offered what Lockheed Martin calls “the first step in the development of a new platform built for next generation simulation and training.” It was one of the first flight simulation platforms to implement DirectX 12, has complete virtual reality support, offers more than 24,000 accurate airports, and includes several high-quality vehicles. Because Prepar3D is a cornerstone of modern military training, home simmers get the benefit of millions of dollars of research and development for a single purchase of US$59.95 under the software’s “Academic License”.

(A quirk of the licensing deal with Microsoft, Prepar3D’s license allows consumers use of the software for education, training, and simulation—but not “entertainment”—purposes. The $60 academic license is likely sufficient for most home flight simulation purposes; additional licenses are available for professional and software development applications.)

Once you have purchased Prepar3D, you’ll find the simulator already includes an impressive array of both air and sea vehicles including the Mooney Acclaim, Piper Cub, Lockheed Electra 10A, Lockheed P-38 Lightning, various version of the Lockheed Martin F-16, the Lockheed F-22 and F-35, the Sikorsky CH-53E Super Stallion, variants of the Sikorsky Blackhawk and a United States Navy Submarine Ohio Class as well as a deep-sea submarine. There’s even a drone, along with a “Civilian Utility Aircraft Single Engine” aircraft that looks suspiciously like a Cessna 172. In all, 41 different fixed wing, rotor and sea-going vessels are included, with a focus on military simulation.

If you’re looking at the list of aircraft and thinking these may not be for you, consider this: In home flight simulation, any simulator you start with—Microsoft Flight Simulator, Prepar3D, or X-Plane—should really be considered just a “base” upon which to build. Although these “bases” do include airports, weather, aircraft, and more, the complexity and number of modern aircraft and airports is such that a $60 purchase could never encompass everything. As a result, third-party developers have created “add-ons” or “mods”, spending thousands of hours and time to ensure every button and switch works as it should. In some cases, these may be released as free file downloads that adjust taxiway signs at an airport. Or, they can be paid downloads of new aircraft that range from $30 – 100.

Partially for this reason, Prepar3D was engineered as an “open ecosystem”, designed to provide significant flexibility for third-party developers to create incredible third-party content. This accessibility coupled with Prepar3D’s 10-year history means that Prepar3D counts some of the best “add-ons” of any simulator, particularly in the civilian airliner category. Some of the most popular and widely known aircraft—including Boeing 737 and Airbus A320—are simulated incredibly well using Prepar3D. There is also a large lineup of true-to-life general aviation aircraft from developer A2A Simulations available as an add-on purchase. 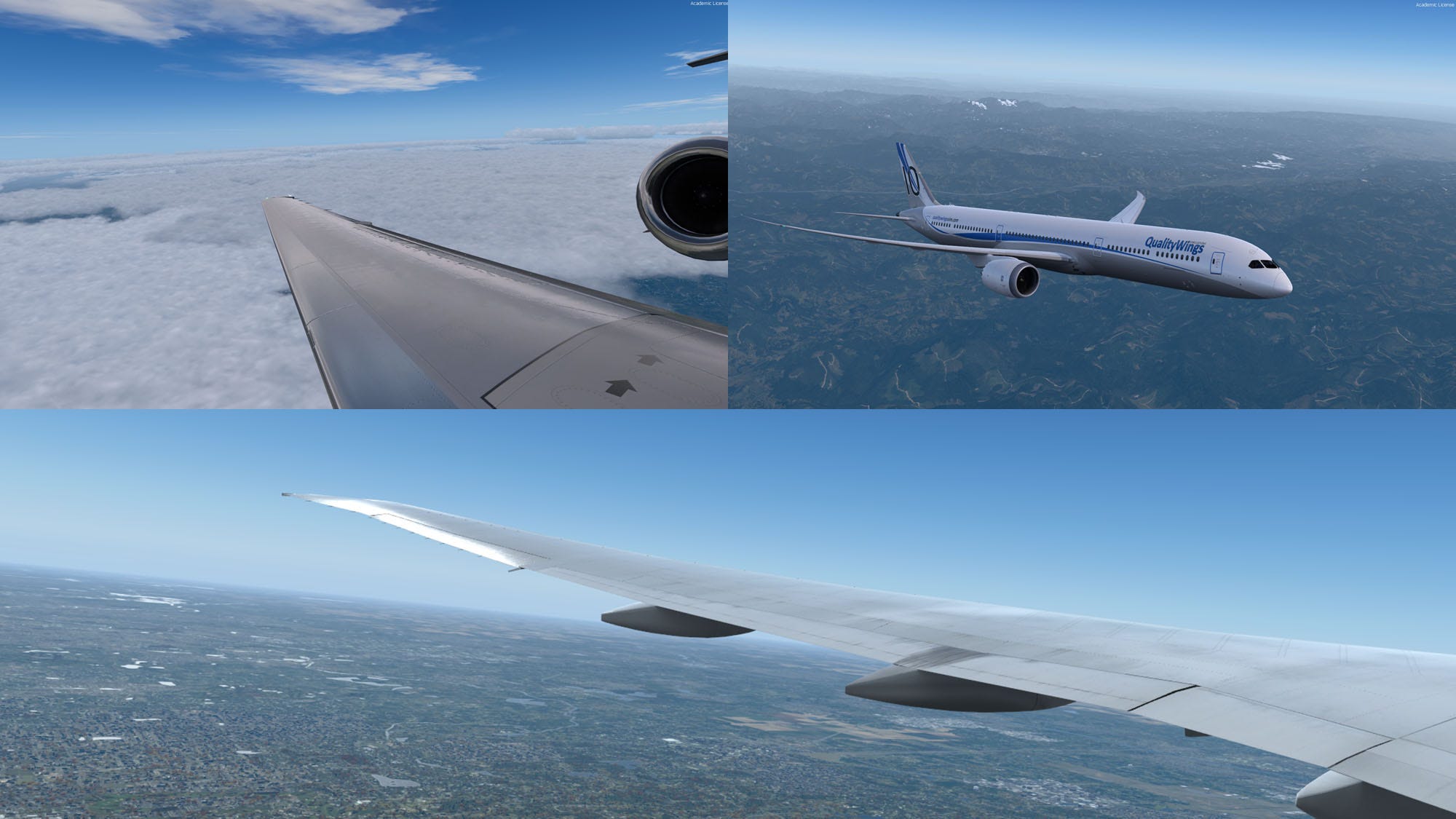 Prepar3D has played host to some of the most high-fidelity aircraft simulation in the past 10 years, including the Boeing 717 from TFDi Design (top left), the Boeing 787 from QualityWings (top right), and the Boeing 777 by PMDG (bottom). Screenshots from Flight Simulation Association Member Ian G.

Alongside significant use in home flight simulation, Prepar3D is a fixture of full-motion simulators and commercial flight training devices around the world. It is also revolutionizing the way flight training is conducted at the U.S. Air Force. Today, the USAF’s Pilot Training Next (PTN) is modernising their pilot training by incorporating a sim-based training curriculum using Prepar3D along with many aircraft including the T-1 mid-level training jet. Students begin with a copy of Prepar3D they can bring home on a laptop and complete their training in full-size motion cockpits using Mixed Reality (MR)—all powered by the same version of Prepar3D available to home simmers. The goal of this simulator-based program is to produce better pilots while cutting the per-student cost of training and reducing training times. 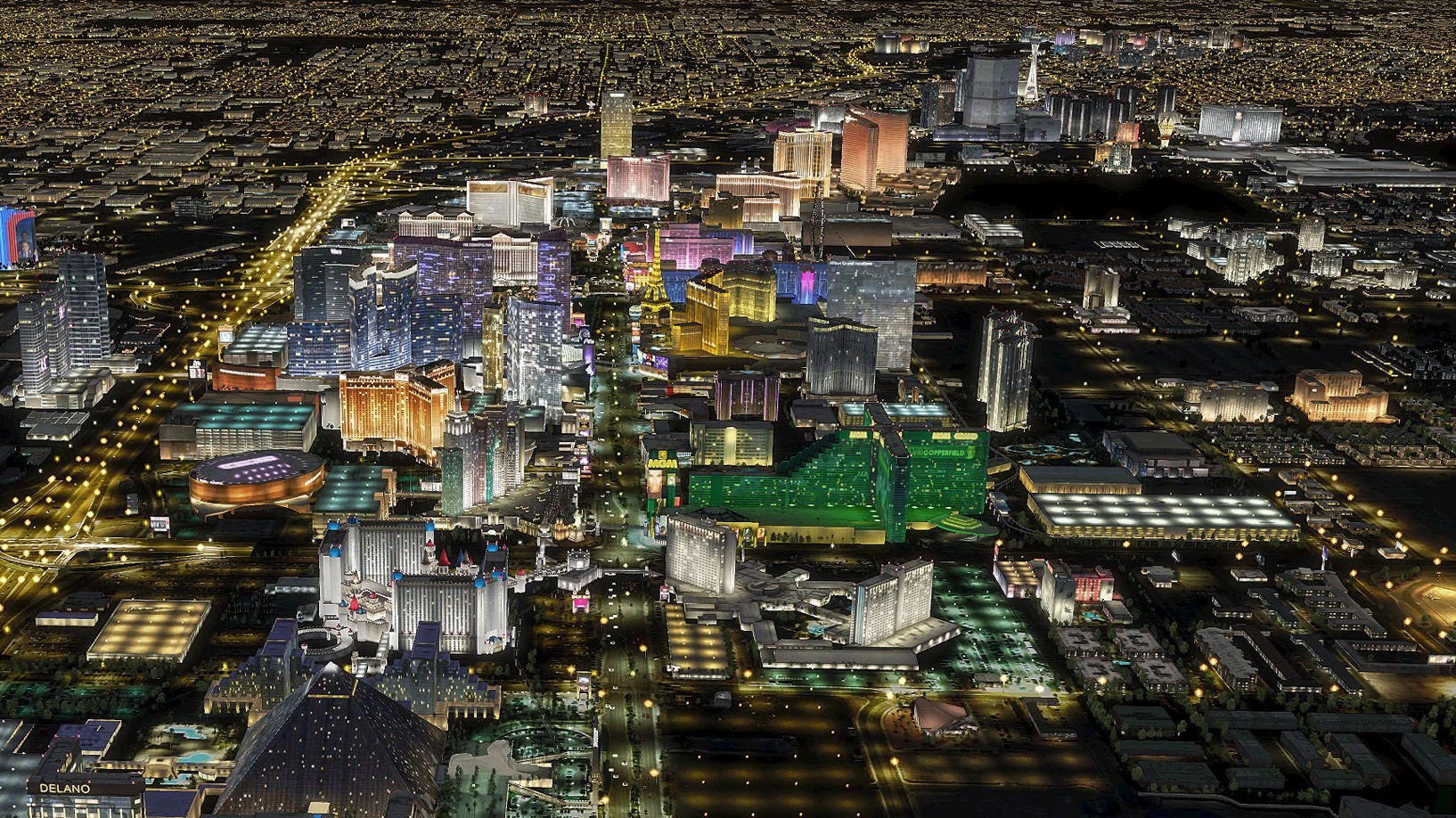 Although it may look like a real picture, this is a rendition of Las Vegas—location of the first-ever FlightSimExpo in 2018. This screenshot exemplifies “add-on” scenery from developer “FlyTampa” as viewed in the Prepar3D flight simulator. Screenshot courtesy of Tony Vann / BRAVO 737.

One of the most important decisions a home simmer will make is which platform to invest in. Each of Microsoft Flight Simulator, Prepar3D, and X-Plane are under active development and offer their own advantages. (There are even mobile flight simulator options now, like the app-based Infinite Flight.)

We launched Flight Simulation Association—an extension of our annual FlightSimExpo—to help take the guesswork out of getting started. Our Getting Started Guide provides step-by-step instructions for setting up a home simulator. We are also a conduit to one-on-one coaching and instruction, meaning you can speak to a real person to get advice for every step of the way along your simulation journey. Whether you’re looking to enhance your home simulator with live air traffic control, add virtual reality to your setup, or just want some help getting started, there are experts who would be happy to connect with you. 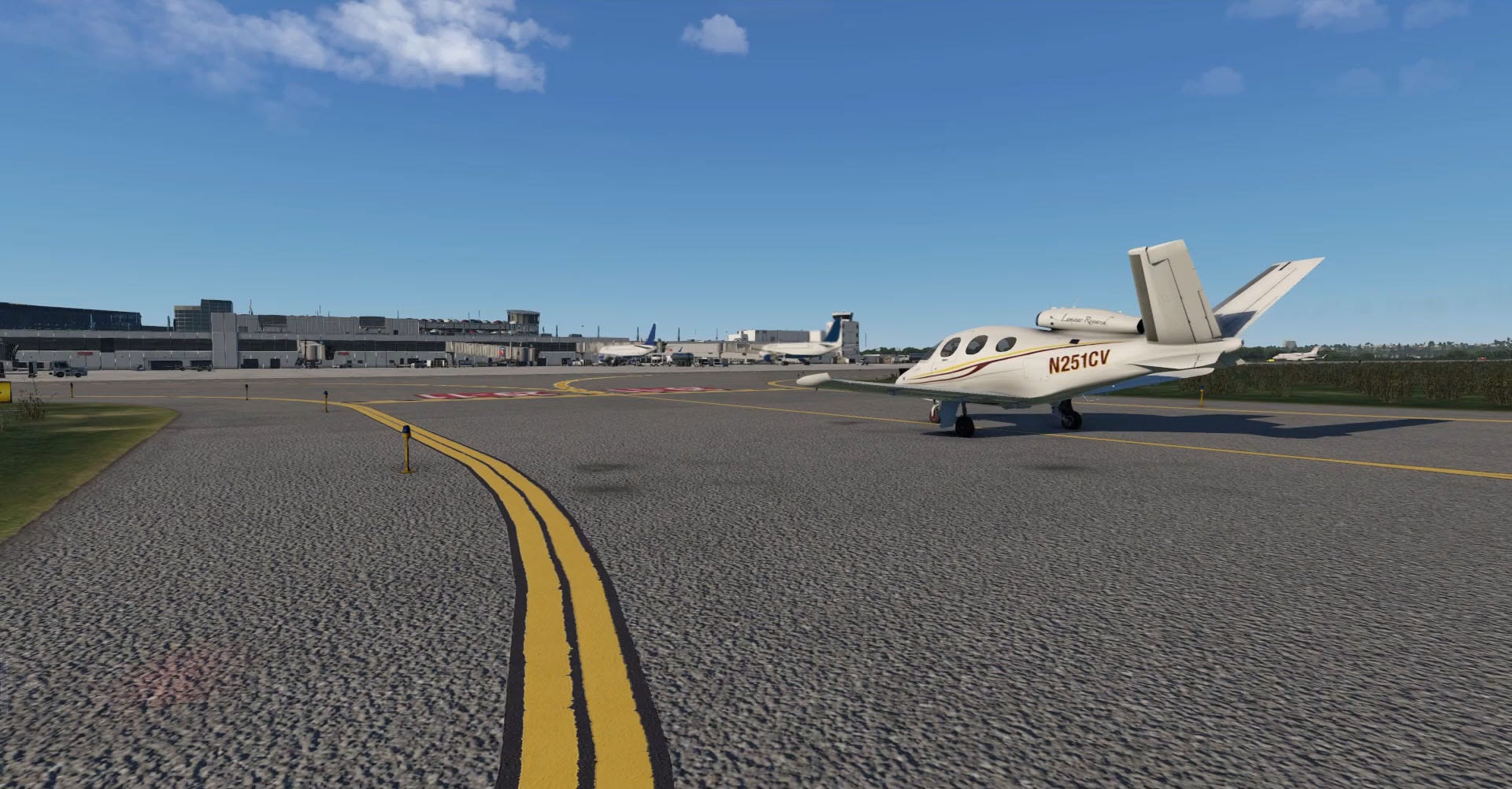 A corporate pilot exits the runway at an airport in Maine—yes, in a flight simulator. The other airplanes visible in the picture are being operated by other virtual pilots in their own home simulators, connected real-time using an online network called VATSIM.

Flight Simulation Association thanks Tony Vann, Chief Pilot and Designer of the “Bravo 737” flight simulation community, along with FSA Captain Ian G., for their contributions to this article.

← PREVIOUS
Carbon monoxide - what pilots need to know
NEXT →
Which iPad do I have?
Related Posts
Categories
Recent posts